Ralph Lauren, the billionaire fashion guru, turns 78 on October 14 and his list of accomplishments is endless. With Ralph Lauren’s net worth being estimated at over $6 billion, you could say he’s accomplished enough for several lifetimes. Lauren can be commended for his monumental feats in the fashion world where we’ve come to see him as a fashion god designing clothes and furniture that epitomizes the perfect American lifestyle. He has based his brand on embodying “America straight up”, but highlights only the very best, shedding the dream of anything that may appear distasteful or “sour”, as Vanity Fair describes it.

We all know Ralph Lauren has spectacular taste for fashion and an undeniable ability to design American perfection. But, he has also created a collection that car enthusiasts will find undeniably perfect: The Ralph Lauren Car Collection. He is not only a fashion guru, he’s also a passionate car collector — and just wait until you read about Ralph Lauren’s garage. It is drool-worthy!

RELATED: 10 of the Rarest Cars in the World 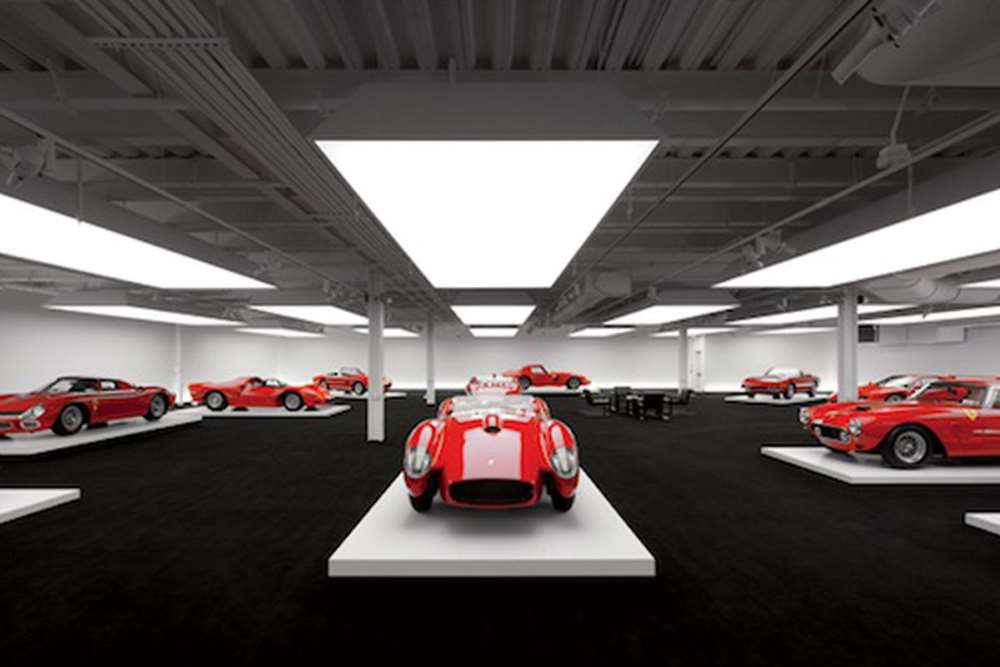 Buying cars upon cars, whether they are fast supercars, expensive sports cars, or ritzy luxury cars, doesn’t mean you have an exceptional car collection of sought-after vehicles like Ralph Lauren has.

Having an exquisite car collection like Ralph Lauren requires extensive knowledge of vehicles and automotive history, dedication, passion, and a heck of a lot of cash.

In fact, Ralph Lauren’s cars are so spectacular that 17 of them were featured in a four-month-long exhibition at the Louvre in 2011 (The Ralph Lauren Car Show). More recently though, Ralph Lauren featured his car collection with his Fall/Winter 2017 fashion line. This exclusive event was at his gorgeous Norman-style house in New York. Only 300 hand-picked elites got to see his private garage and prized automotive collection. The guest list comprised of the whos who of New York, but the true stars of the night were Ralph Lauren’s cars.

The fashion show took place in Ralph Lauren’s garage which is completely windowless and features a ramp connecting the ground level to the second floor. This was done so that Lauren could drive the cars out freely. Now that’s a dream garage for any car enthusiast!

The recent Ralph Lauren Fashion Show displayed several of the acclaimed designer’s cars which are all in pristine condition and looking as great as they did when Lauren first purchased them. Many of these cars are considered classics, but they by no means look outdated. Ralph Lauren’s car collection, much like his fashion line, is timeless.

Not only do his cars stand the test of time, but Ralph Lauren’s automobiles all have their own sentimental value and meaning to the designer — who explains his passion for cars like this:

[image quote here[“Cars are like children: It’s hard to say that any one is more special than the other. There are little things about each car that you come to love, whether it’s the look, the steering wheel, the way it drives, or even the way it drives differently when you put the top up. They all have identities; they have spirits and characteristics that are truly endearing in some way.”

The Ralph Lauren car collection value has been estimated by Forbes to be over $300 million. Here are a few of the classic cars you’ll find stashed in his private garage. 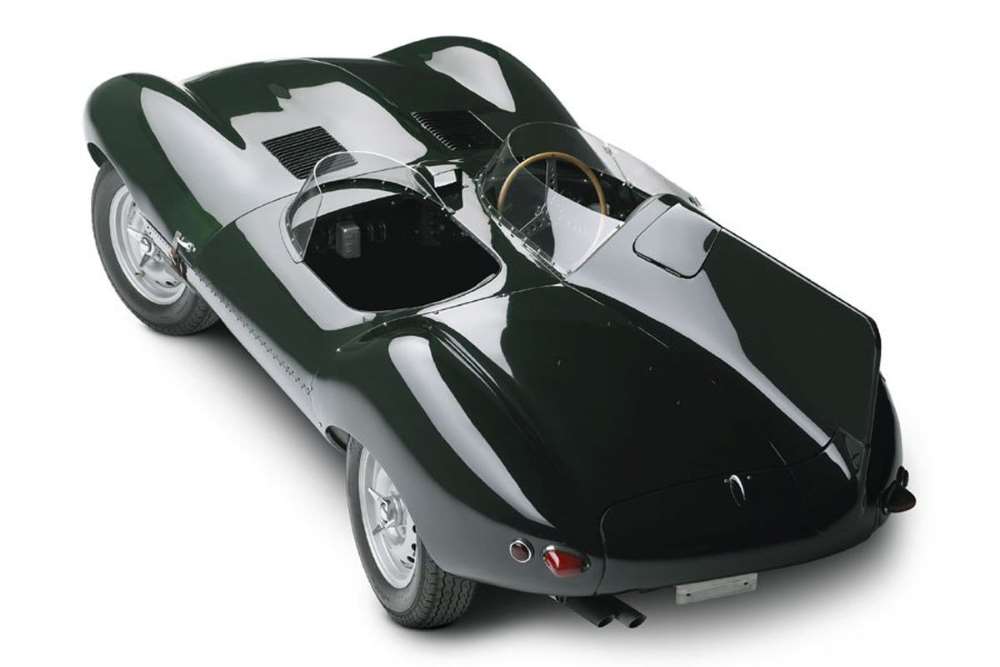 This 1950s Jaguar is painted in a custom color created by Ralph Lauren himself. The color is British Racing Green with a twist, adding a bit more life to the classic Jag than the original subdued green. This beautiful Jaguar is one of five owned by the veteran fashion designer.

Revealed just after World War II, the public loved the new Jaguar XK120. The Jaguar became a celebrity among celebrities, with the likes of Hollywood accolades of the time like Humphrey Bogart and Clark Gable both purchasing a Jaguar XK120 Roadster for their personal collections. Over time, the aluminum alloyed roadster has come to be called the quintessential British car. 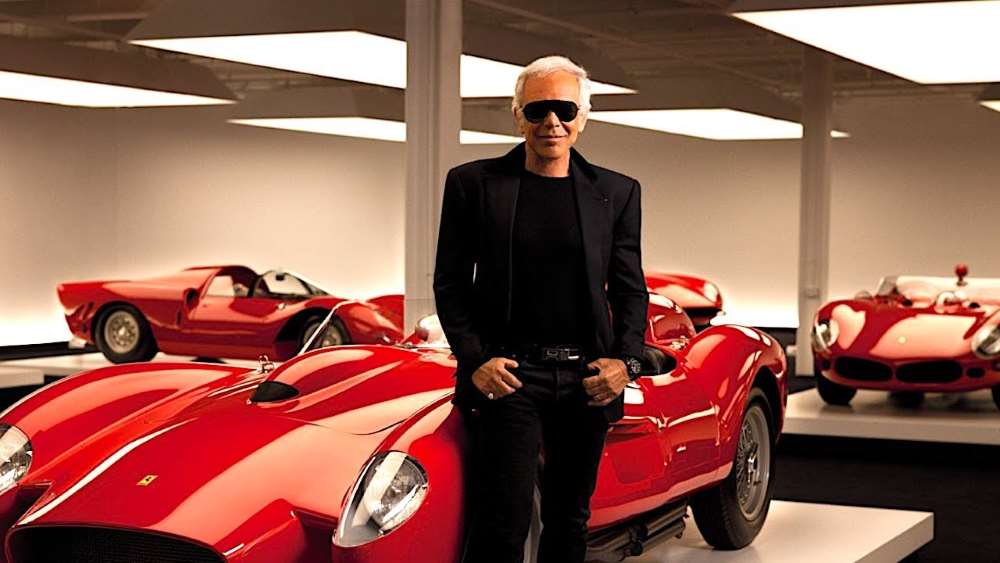 It is not surprising that Ralph Lauren owns what is known as one of the most expensive cars in the world currently. Another model of this classic car has been sold at auction for over $38.3 million. That’s not what Lauren paid for his Ferrari 250 GTO though, He purchased this valuable classic car in the 80s and only paid $300k for it. Ralph Lauren’s Ferrari is one of the most sought-after cars in the world and for 300 people, the night of the Ralph Lauren automotive fashion show were fortunate enough to lay their eyes on it. 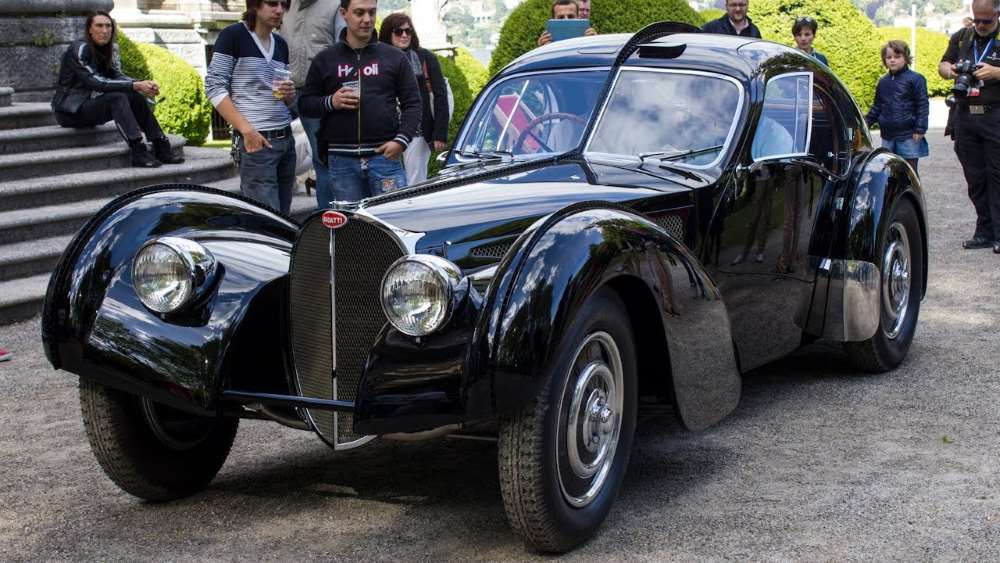 Any Ralph Lauren car collection list would not be complete without mentioning his gorgeous 1938 Bugatti. A complete rarity, with only four ever built. But beyond its rareness, the Bugatti 57SC has been said by experts to be one of the most beautiful cars ever designed — the Helen of Troy of the automotive world, if you will. One of the gorgeous Bugattis sold at auction for around $36 million at auction. There surely was a bidding war over this Helen of Troy!

Ralph Lauren’s Bugatti won ‘Best in Show’ at the 1990 Pebble Beach Concours d’Elegance and more recently took home the same blue ribbon at the 2012 Concorso d’Eleganza Villa d’Esta. It seems fitting for it to make an appearance at one of the biggest nights in fashion, don’t you think? 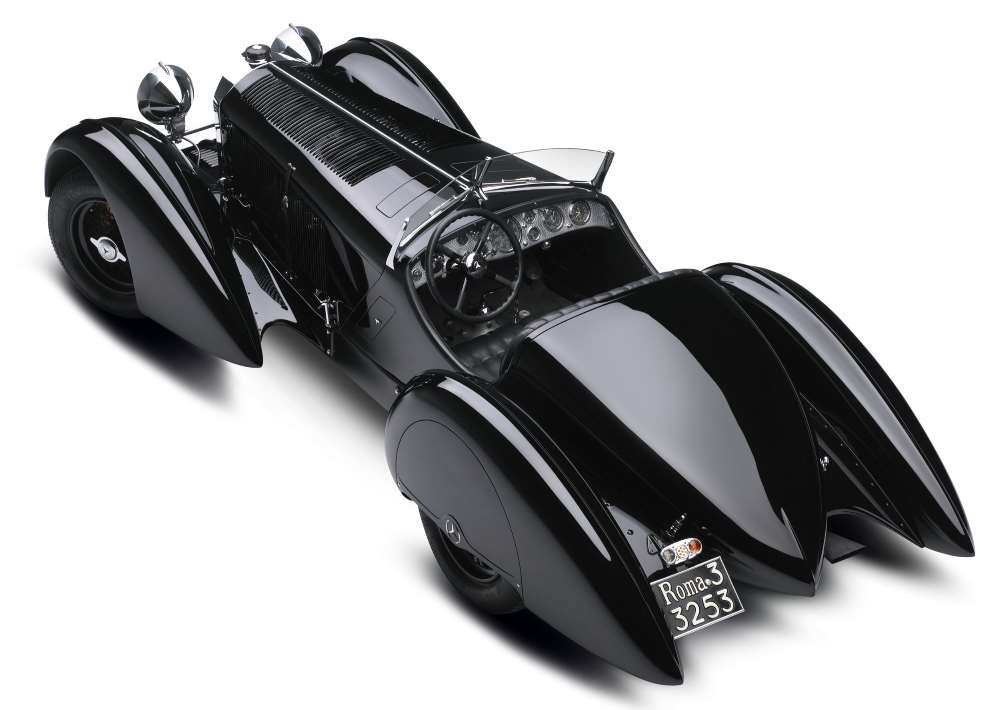 Here we have another one of Ralph Lauren’s classic cars. Previously owned by Count Trossi himself who was also an Italian race driver and automotive constructor, Ralph Lauren’s Mercedes was commissioned by Count Trossi to be customized — a project that took about a year to complete. A few of the most notable features of the ‘Trossi’ SSK is its overwhelmingly large hood that overtakes most of the car’s body paired with a protruding radiator and snake-like exhaust pipes.

A true piece of art befitting a night dedicated to creative design. No surprise here that the Trossi Mercedes found in Ralph Lauren’s car collection has won a few ‘Best in Shows’ over the years as well. 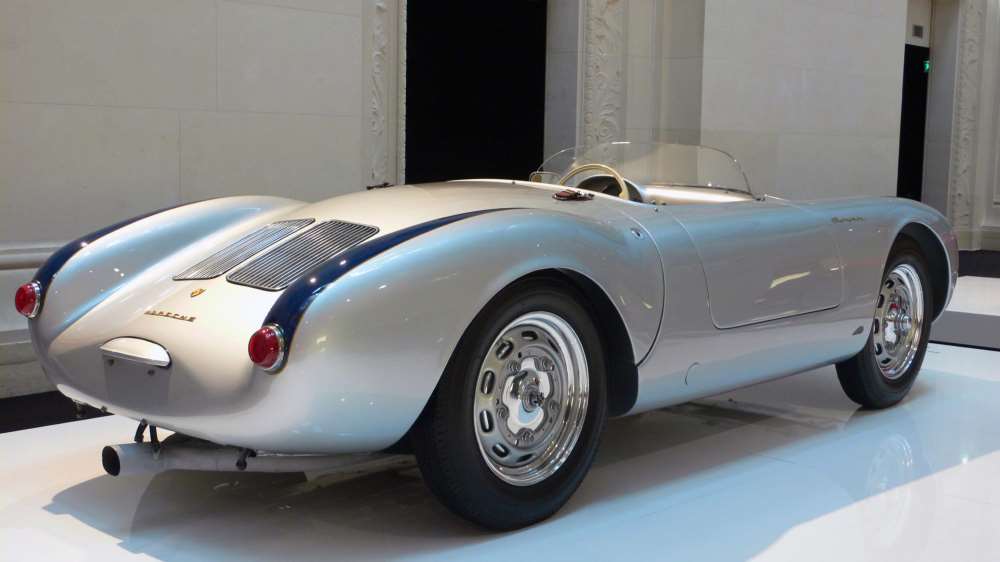 When Ralph Lauren talks of creating the perfect piece of clothing, it takes more than simply having a design in mind. Instead, it takes the ability to actualize the idea in what eventually becomes a piece of art. Much like his work in the fashion industry, Ralph Lauren’s Porsche 550 Spyder has been deemed, within the automotive industry, a true piece of art and automotive perfection.

Only 90 units of the small German-made car were produced, each lightweight roadster housing a 1.5 liter flat-four engine with manual four-speed transmission capable of hitting 140 MPH. You may recognize this car as James Dean’s ‘Little Bastard’ as it was the very same model of Porsche that the late actor was killed in. Jerry Seinfeld, a Porsche fanatic (that’s an understatement), used to own one of these as well. Seinfeld’s Porsche 550 sold at auction in 2016 for $5.35 million. 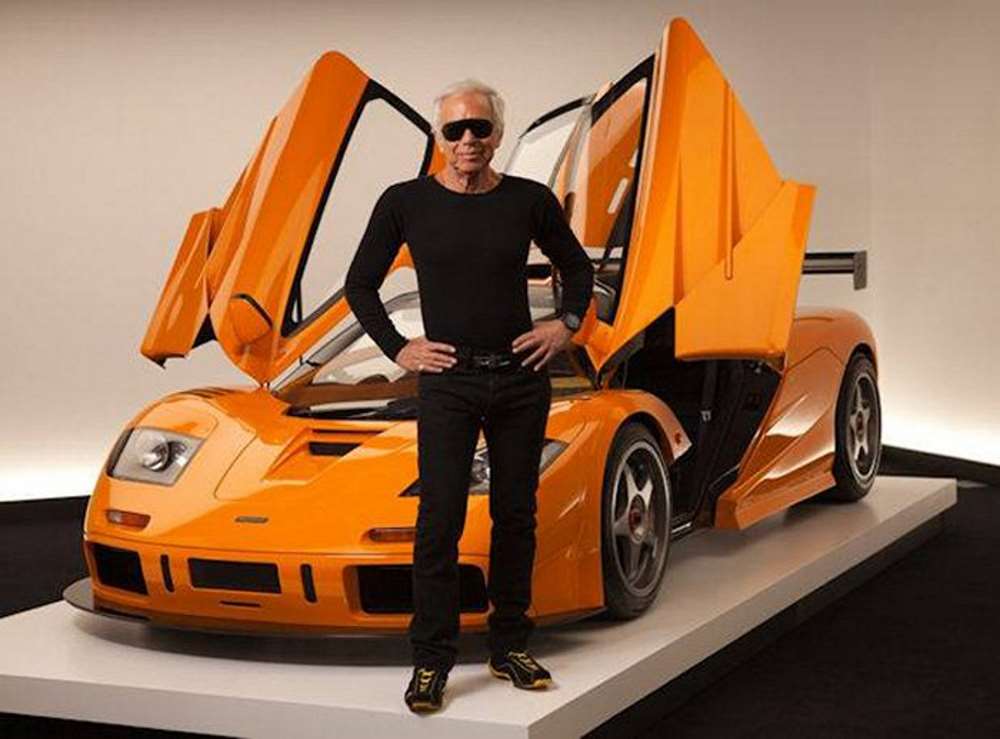 For those who know McLaren well, you will know just how special Ralph Lauren’s McLaren is. With only five ever built (excluding the prototype LM that was never sold), the F1 Le Mans (LM) is extremely rare and highly sought after by automotive collectors.

All five of the uniquely produced units are painted in the same Papaya Orange color that Bruce McLaren, the company’s founder, painted his race cars. Each one of these orange F1s have 691 HP and 562 lb-ft of torque in them.

A few other noteworthy pieces of Ralph Lauren’s automotive collection are a 1955 Mercedes-Benz 300 SL Gullwing Coupe, a 1979 Porsche 930, a 1971 Mercedes-Benz 280 SE, and a 1955 Jaguar XKD Long-Nose. You can get an in-depth look at Ralph Lauren’s car collection by checking out Vanity Fair’s exclusive slideshow dedicated to showing off all his amazing automobiles.

Which piece of car perfection in The Ralph Lauren Car Collection is your favorite?

SEE ALSO: The Jay Leno Garage: Find Out What Leno Has Stashed Away!