Tesla Truck: The All-Electric Tesla Semi Truck That “Will Blow Your Mind Clear Out of Your Skull”, Says Elon Musk

After a long wait for the all-electric Tesla Truck, finally, on Thursday Nov. 16, 2017, Elon Musk unveiled its latest model. At the highly anticipated evening event Elon Musk showed off the Tesla Semi Truck which is said to not simply blow you mind, but is so impressive that the CEO boasts it “will blow your mind clear out of your skull”.

During this unveiling Tesla also showed off a brand new Roadster that can skyrocket from 0-60 mph in only 1.9 seconds. Something they are far more familiar with and the ground-breaking 0-60 mph time proves that.

But what about this battery powered semi truck? Will this new automotive venture into the trucking industry be a success?

While we all know Tesla to be a forward-thinker in the realm of cars, Elon Musk is now trying to tackle the trucking niche to try and make a bigger impact on climate control. The jump from all-electric cars to all-electric semi trucks isn’t a small one though. As Forbes explains, Tesla’s entry into the slow-adapting, global logistics industry could be one of the biggest disruptions the industry has seen in over a century. The stakes are high in this multi-trillion dollar industry. As the saying goes, big risk, big reward. 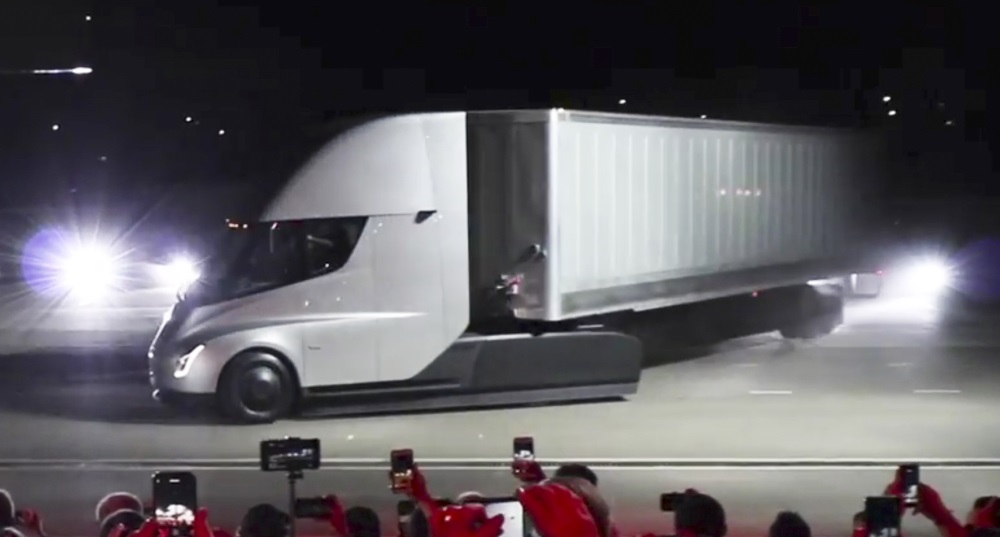 How Will The Tesla Semi Truck Haul Itself to Success?

Tesla’s new semi trucks will compete against the trucking industry’s top dogs by equipping the big rigs with some pretty hefty specifications.

For starters, the hauling capability is quite impressive considering it is battery powered. The Tesla Semi Truck will be able to haul a fully loaded 53 foot long trailer at 65 mph. To put this into perspective, due to the semi truck being in the Class 8 Heavy Duty truck segment, this means the vehicle will be capable of carrying up to 80,000 pounds.

Next comes its battery range and charging capabilities. The electric truck will be able to travel up to 500 miles before needing to be juiced up again. From there, the Tesla Semi when charged at Mega-charging stations will give it another 400 miles of juice after only half an hour of charging.

Perhaps the most impressive capability is that the Tesla Truck will be equipped with the second generation of Autopilot. This technology will make it possible for the truck to drive itself on highways using enhanced semi-autonomous driving with advanced features like “automatic braking, lane keeping, and lane departure warnings”, WIRED reports.

There’s also speculation that the Tesla Truck will potentially be powered by solar panels — partially at least.

The specs on the Tesla truck are not without merit, but will they be enough to compete against regular diesel heavy duty semis? The electric truck’s actual hauling capability is not as powerful with modern day big rigs capable of hauling the same weight (and more) for much farther distances. So in that respect, Musk has some work to do. But the Tesla Truck fully-electric battery, partial autonomous driving features, and future super-speed charging stations are promising,

But specs alone aren’t enough. What really matters is how much will these new semi trucks cost?

While Tesla’ new semi trucks have noteworthy specs that aim to set the company apart from big rig leaders, it really all comes down to the money. Sure you might have a solid semi, but if the Tesla Truck is too expensive to buy, insure, and maintain, the scale of success could be substantially reduced.

Musk has thought of this too. During the EV truck reveal, the Tesla CEO made big promises of cost efficiency by offering affordable leasing, reduced insurances costs resulting from better safety features, and significantly less cost for maintaining the electric powered truck.

Then there’s the ‘1 million no breakdown guarantee’ that comes with every Tesla Semi.  What remains to be seen is the exact Tesla Truck price which Musk did not disclose during the unveiling.

While it might be a pretty big risk jumping into the big rig ring, the Tesla Truck has a heck of a lot going on. But Is it as mind blowing as Elon Musk claims it is? Time will tell. Promises have been made, let’s see if Tesla can keep them.