Kylie Jenner Has Cars that Live Up to the Kardashian Lifestyle

We can’t go one week, let alone one day, without hearing a new story about one of the Jenners or Kardashians. Constantly in the limelight, forever making celebrity gossip headlines, and always making a mess of something in their lives, the Kardashian family has been born into fame and fortune.

One of the youngest Kardashians, Kylie Jenner, has gained most of her fame from social media, using Snapchat and Instagram to document her life. Kylie, daughter of now divorced, Kris and Caitlyn (formerly Bruce) Jenner, has lived an undoubtedly fortunate life surrounded by all things lavish, luxurious and obscenely expensive. Kylie Jenner lives up to the ridiculous Kardashian lifestyle with her fashion line, new reality TV show ‘Life of Kylie’, and her exuberant purchases. Being that this is an automotive blog, I am going to leave her $12 million mansion alone and focus on her cars. Not only does she buy expensive cars for herself, Kylie Jenner gets cars for her birthday every year it seems.

Sometimes it is hard to believe that Kylie Jenner owns these expensive performance and luxury cars. Especially after her latest comment on ‘Life of Kylie’ where she says that she feels guilty for not driving her Lambo. A serious SMH moment for car enthusiasts out there. But of course, being a Kardashian, this sort of thing is all too predictable.

RELATED: Will Justin Bieber’s Car Collection Get Better With Age?

The Kylie Jenner Car Collection: Living Up to the Kardashian Lifestyle

While I am all for taking a closer look at the crazy expensive Kylie Jenner car collection, mostly because it is filled with some pretty impressive cars, even though she owns these cars it doesn’t mean she can drive them properly. The Kardashians have a terrible track record when it comes to driving.

Unfortunately for the Kardashians, owning expensive and fast cars have led the family to some serious car crashes. Whether it was Kris Jenner’s most recent accident or Kanye West’s car crash it seems that even though the billion-dollar family can afford these expensive cars, it doesn’t mean they should.

Putting that thought aside, there’s no doubt that Kylie Jenner owns cars worth mentioning. Here’s just a few highlights of Kylie Jenner’s cars. And by highlights, I mean just a mere glimpse.

For Her 18th, Kylie Jenner Got a Ferrari 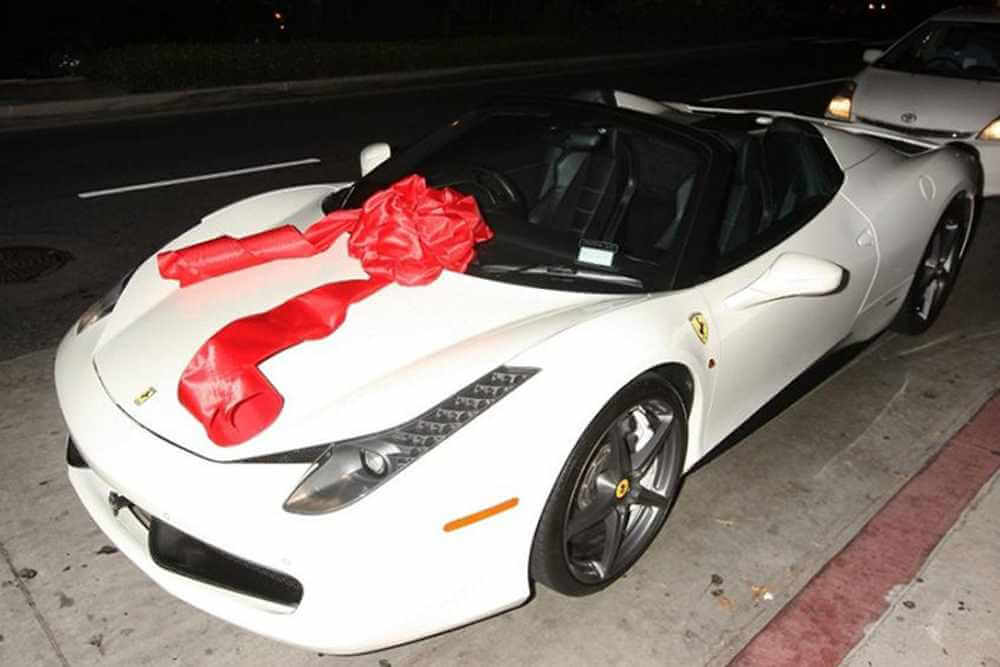 Kicking off the Kylie Jenner car list is her 18th birthday present from rapper boyfriend, Tyga: a white Ferrari which she later had repainted in matte gray. A pretty remarkable present for an 18 year old, even if you’re a Kardashian.

The now-gray Kylie Jenner Ferrari is a powerful luxury performance car that I am not quite sure Jenner, at 18, would know what to do with. Regardless, the Ferrari 458 Italia Spyder houses a premium V8 4.5L engine and 7-speed automatic transmission producing 562 ponies and hits a top speed of 199 mph.

A gorgeous car, and a pretty awesome gift, but unfortunately Tyga couldn’t actually afford it and supposedly had it leased under Kylie’s own name. Way to go.

The Kylie Jenner Range Rover We All Heard About 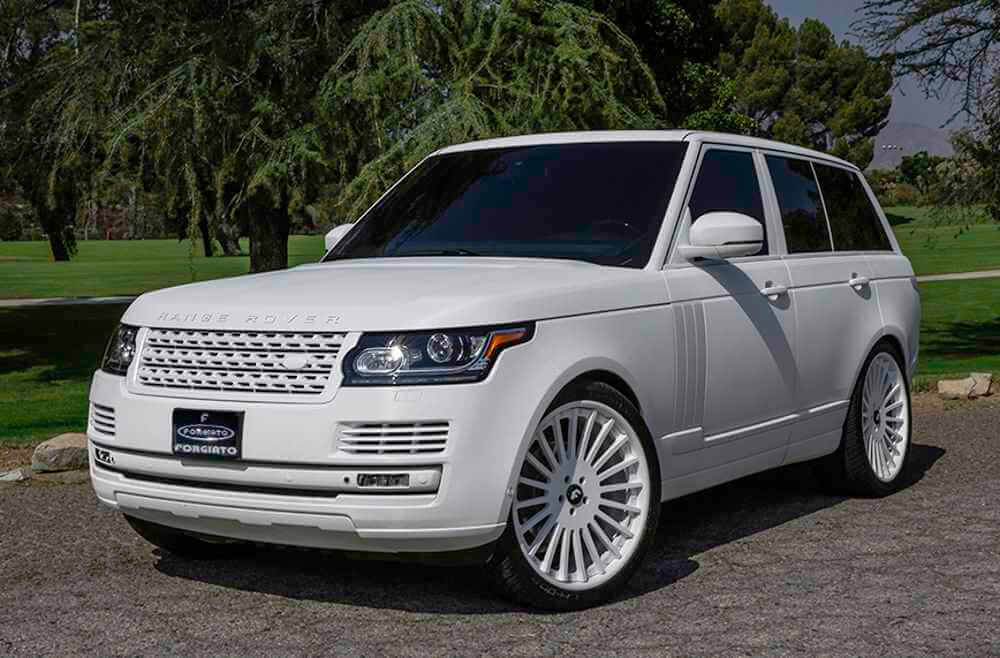 One year later for Kylie’s 19th birthday, the social media butterfly decided to go all out and buy herself her very own Land Rover Range Rover SV Autobiography Edition. This $200K self-given birthday present shows off her fame, fortune, and love for herself. It was all because she “just got a little excited” as her Snapchat followers were told in her video. Oh boy, did you ever, Kylie. But let’s face it, she probably didn’t even blink at the price tag.

Birthday excitement aside, Kylie Jenner’s Range Rover Autobiography Edition is stunning: featuring a gorgeous two tone leather interior, a handful of flat screen TVs, and probably every upgrade under the sun (knowing Kylie). Not only is this a pretty extravagant gift to give yourself, she bought it a week before her birthday because she couldn’t wait. Oh the life of the young, the rich, and the famous. For the rest of us, we’d settle for just a plain old Land Rover, right?

The Kylie Jenner Mercedes: Another Birthday Gift from Tyga

Kylie Jenner’s Mercedes Maybach  is undeniably gorgeous with its sleek black paint job paired with an extremely expensive price tag of $200k. Her Maybach is stocked with an exceptionally powerful engine as well: a 6.0L 12-cylinder engine with 523 hp to be specific. The car is also stocked with luxury features like the Burmester High-End 3D Surround Sound System with 24 speakers throughout the cabin of the vehicle.

Not too shabby. Definitely an impressive car for anyone to own let alone get as another birthday gift.

After the 2011 Geneva Motor Show the Lamborghini Aventador became the company’s new flagship sports car and these insanely fast cars started popping up all over the place — especially parked in the driveways of only the elite.

Kylie Jenner could have purchased this $400k+ sports car ‘just because’ or it could have been to celebrate being one of the youngest people on Forbes Top 100 Highest Paid Celebrities of 2017. But it is more likely that she just bought it because she could.

At #59, Kylie beats out Bruno Mars by one position and is only 12 spots away from making the same amount of money as her step-sister Kim Kardashian West. Whatever the reason is, she is now the owner of this vibrant orange Lamborghini Aventador SV.

This mighty fine whip is a powerful piece of machinery. But this should be expected being an SV which stands for Superveloce, an italian expression, meaning Super Speed. The fierce looking Aventador SV has a 6.5 liter V12 740 horsepower engine and roars from 0-60 mph in 2.8 seconds and hits an insane top speed of 217 mph.

This is most definitely a Kardashian kind of car. One that is ridiculously expensive, has mind-boggling specs, and makes you afraid for her life while she’s driving it.

Oh Kylie Jenner… a Rolls Royce is Just What You Needed to Feel Better!

Another favorite among celebrities at the status-quo level like Kylie Jenner is a Rolls Royce. She bought this red Rolls Royce after one of her many breakups with Tyga.

The stunning red Rolls Royce Wraith is the second addition in Kylie Jenner’s Rolls Royce collection and is priced at $320k. The stock specs on a Wraith like this are a V12 twin-turbo charged engine with a 8-speed automatic transmission, 624 horsepower, and a top speed of 155 mph. At least this one can’t go as fast as Kylie Jenner’s Ferrari or Aventador, right?

Now, we know Kylie Jenner gets a new car when she is happy and sad. So basically all the time.

So how many cars does Kylie Jenner have? It is hard to know for certain, but with her constant Snapchats about her new whips, it seems like Kylie Jenner has a car for every occasion. She buys them, drives them once, she parks them and then feels guilty about it.

One can only assume that Kylie Jenner has another new car on the way, being that she just turned 20 on August 10th and gets a birthday present in the form a car almost every year. But at this point, nothing will surprise me. Although, if she bought a Prius…

Smokey and the Bandit Car: From The Big Screen To Your Own Garage