“The name is Bond, James Bond.”

If you haven’t already heard, Daniel Craig has confirmed that he will be returning as 007 in the 25th James Bond movie of the world renowned franchise. He revealed this exciting news on Stephen Colbert’s late night talk show with a simple “Yes” and with that one word; we can now all start looking forward to Craig as the suave James Bond.

But what also came to mind while hearing the news of Craig’s return is, what car will 007 be driving in the next James Bond movie? Well, my vote is for the infamous Aston Martin DB5 to make another appearance and really make Bond 25 a must-watch on all fronts.

And for this reason, what better way to pay tribute to the 007 legacy and celebrate its 25th movie than by looking at the iconic James Bond car with all its features, specs, and of course those mandatory kick ass James Bond gadgets.

The James Bond Aston Martin DB5 is the mode of transportation in a total of seven action packed, gadget crazy James Bond movies (for now). While it was the third 007 car to appear in the movies, it has become the most notable and iconic vehicle in the whole James Bond franchise. And with good reason, I mean just look at it! 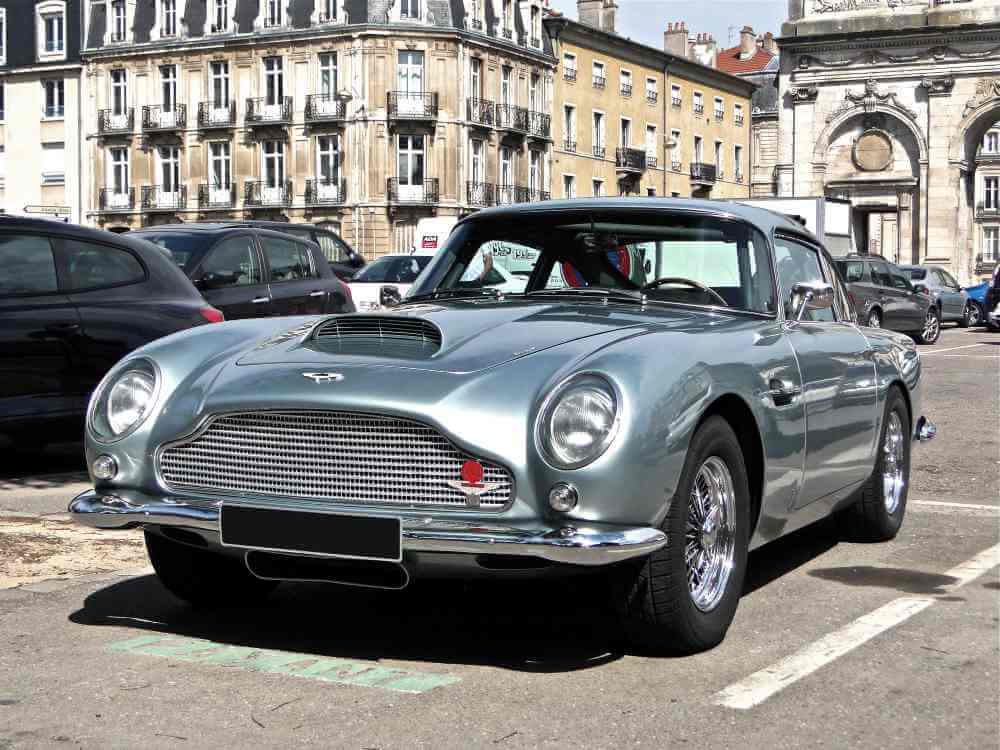 The original 1964 Aston Martin was equipped with a front mounted 4.0L engine boasting 282 bhp @ 5500 RPM and sprints from 0 to 60 mph in 8 seconds and reaches a top speed of 143 mph. The DB5 may of not been the fastest car of its time with its competition, the Ferrari 250 GT0 and the Jaguar E-Type having faster top speed and accelerations times, but that wasn’t the point. The Aston Martin’s feats were in its mechanical improvement from the DB4, exceptional handling and overall driving experience as a luxury sports car. Speed isn’t everything and the fact that the DB5 is the most famous car in the world proves this.

Now let us move onto to the Aston Martin James Bond DB5 appearances and all its cool gadgets! 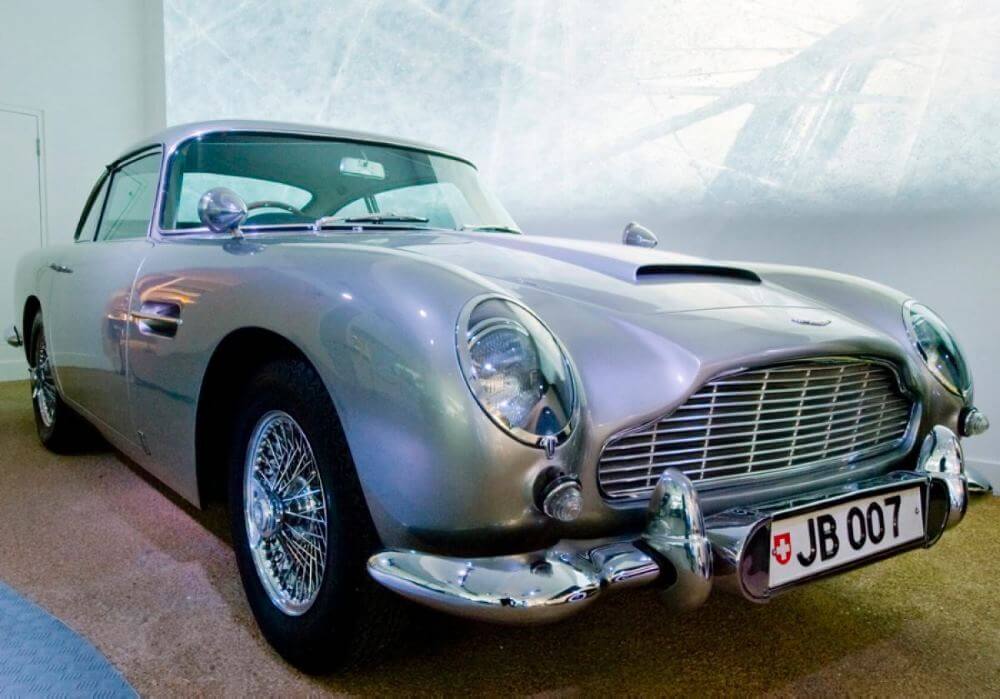 The Aston Martin 007 car was first seen in the 1964 James Bond movie, Goldfinger, where arguably, the DB5 stole the show with all its awesome gadgets and paved the way for it to become the most iconic James Bond car — even with Sean Connery’s smooth talking voice.

As for the James Bond gadgets, this is where the real fun starts. The Aston Martin James Bond drives has some of the most memorable gadgets with its revolving number plates, which every spy needs to go incognito.

In Goldfinger, the license plates include Switzerland, France, and the United Kingdom; all of the countries Bond was required to go to complete his mission. The car is also equipped with a handful of defense gadgets that could all be turned on by accessing the secret armrest control panel. Such defense mechanisms include: oil slick, smoke screens, left and right machine guns, and a rear bulletproof screen. Other gadgets like a GPS Navigator and tire slashers prove to be a great help whilst Bond tailed Goldfinger (Gert Fröbe) in the Swiss Alps.

Finally, the list of gadgets to be mentioned would not be complete without the infamous ejector seat, something every spy needs for a quick escape route.

As Q (Desmond Llewelyn) tantalizes us with all the features of James Bond’s car, there was no doubt that viewers would be in for an exciting ride! Being that this was the first time a 007 car was filled with gadgetry, it took all of one scene to make the Aston Martin DB5 an unforgettable addition to the James Bond car collection.

“A martini. Shaken, not stirred.”

But this was truly only the beginning for the iconic James Bond DB5 as one year later, Thunderball hit theatres and the car was once again filled with Q’s gadgets — some old, some new. The most notable new gadget for the second of Sean Connery’s James Bond films is the added water jets. With that added car feature and a handful of other water-oriented gadgets from Q, viewers could only imagine what type of underwater missions the international spy would go on. And did they ever blow us out of the water!

While Bond fans might of been graced by the presence of the DB5 in two back-to-back movies, it wouldn’t be until 1997, 32 years later, when Pierce Brosnan took the role of 007 in GoldenEye, that the Aston Martin DB5 would make its third appearance.

Pierce Brosnan Takes The 007 Car For a Spin

The long on-screen absence for the 007 Aston Martin did not mean its popularity faded by any means. As we know, absence only makes the heart grow fonder, and when the Aston Martin with Brosnan at its wheel hit the big screen in 1995, the car hit legendary status.

This time around, the 007 car comes with a new set of plates, (BMT 214A) and includes gadgets like the Alpine 7817 radio transmitter which could be used as a printer and a communicator. There’s also that amazing champagne cooler hidden in the middle console and of course you’ll only find Bollinger champagne in there.

Q: Don’t say it…
James Bond: The writing’s on the wall.
Q: Along with the rest of him.

Luckily, there wasn’t such a gap between the Bond DB5 appearances (thankfully), and viewers only had to wait until the next James Bond movie Tomorrow Never Dies to see it — albeit quite short. This time the Aston martin DB5 was only seen briefly in London when visiting the ministry and then once again on the grounds of the Oxford College.

This wouldn’t be the last time, we get to see the legendary car in theatres. When Daniel Craig took the role of 007, he has his own turn at the wheel of the Aston Martin DB5.

Daniel Craig Takes the Wheel of the DB5 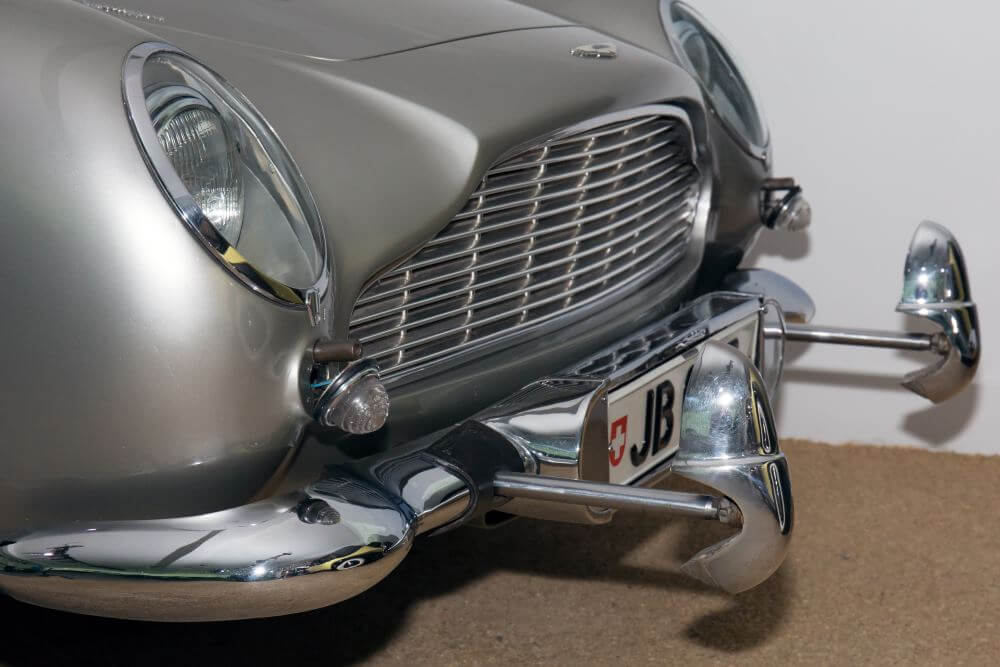 Where it all started – Aston Martin DB5 in Goldfinger (Image: Wikipedia)

It just wouldn’t of been right for Daniel Craig to go through his time as 007 without having his own chance to drive the Aston Martin DB5. In fact, he got ample time in the car with it being in three of his Bond movies.

In Craig’s first movie as James Bond after a there was a break in filming the Bond movies, we see him driving the famous car with a nameplate once again, ‘56526’. He acquires the car by winning a game of poker. While this Aston Martin DB5 has no visible gadgets persay, it is the only left hand driver of DB5s in the series which is pretty awesome all on its own.

(After her just lost $10 million in a the poker game)
James Bond: Vodka-martini.
Bartender: Shaken or stirred?
James Bond: Do I look like I give a damn?

The next James Bond movie to feature the Aston Martin DB5 is Skyfall. The original 1964 DB5 returns with all its glorious gadgets we saw back in Goldfinger. The infamous ejector seat is back accompanied by two front firing machine guns which haven’t been seen in action since 1964. 007 uses the DB5 in Skyfall to drive M (Judy Dench), to Scotland. You may of also noticed that the original ‘BMT 214A’ nameplates (include “s” in hyperlink) are back!

While you might be worried about one of the last scenes in the Skyfall when the James Bond Aston Martin gets blown up, this was not a DB5 or even an Aston Martin for that matter. The car that got destroyed was actually a Porsche. Phewf! Mind you, it is still slightly disconcerting that a nice Porsche was blown to bits.

The James Bond car returns in the very next movie of the series in Spectre which brings us to the latest Bond movie. While we may of been worried due to the vehicle’s state in the last movie, being one of the most famous Bond cars, there was no way that it was lost forever!

The Aston Martin DB5 is restored by Q (now played by Ben Whishaw) and while it is not seen throughout the movie, by the end we see 007 driving it with Bond girl, Madeleine Swann.

Quite the legacy don’t you think? That’s not to say that there hasn’t been many other amazing Aston Martin’s featured in the other movies, as we all know and expect the best modes of transportation for James Bond in all his movies.

For those that love this James Bond car, let’s hope that the next Bond movie features the iconic Aston Martin DB5.

Kylie Jenner Has Cars that Live Up to the Kardashian Lifestyle